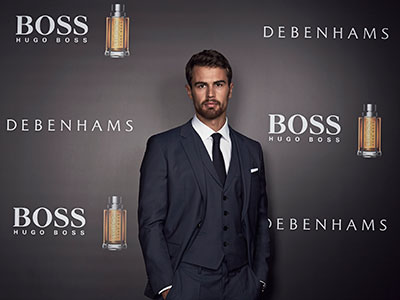 Hollywood actor Theo James who is the face of the new male fragrance from Hugo Boss, excited fans with a meet and greet at the flagship Debenhams store in London, earlier this month.

James was chosen to front the 'Boss The Scent' male fragrance campaign because the brand believes he personifies the seductive side of the BOSS hero and is confident in his physical presence.

The actor who stars in the Divergent film series, joins an exclusive circle of BOSS Parfums ambassadors, including Gwyneth Paltrow and Gerard Butler.

James says: “I’m honoured to be representing BOSS Parfums as an ambassador in their latest perfume campaign. I have for a long time admired BOSS for achieving a perfect balance between the classic and the contemporary. This campaign encapsulates the iconic spirit of the brand and reflects my own tastes and attitudes towards a truly unique fragrance.”

Boss The Scent eau de toilette is available nationwide with a starting RRP of £45.