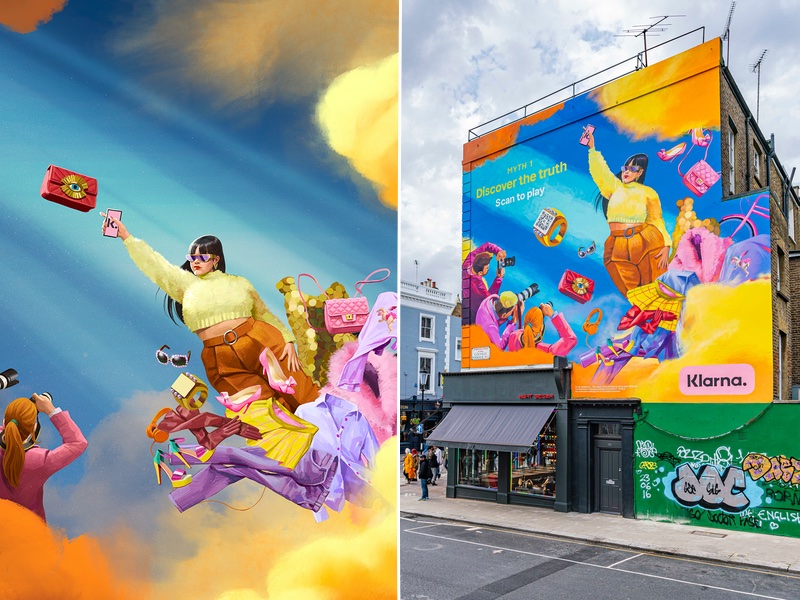 Buy now, pay later titan Klarna is setting the record straight with a new tongue-in-cheek campaign that responds to skepticism from its critics.

Pay later solutions have come under fire for encouraging consumers to get into debt, and as the market leader, Klarna, which is backed by US rapper Snoop Dogg, has faced the brunt of much disapproval.

Some research has warned that some pay later schemes are affecting shoppers’ credit scores, and data released by comparethemarket.com in 2020 found that 22% of UK consumers’ credit scores had been impacted due to the plans; something Klarna vehemently defends.

“To date, a customer’s credit score has not been impacted by using Klarna’s ‘pay later’ products even if they have failed to pay on time,” wrote the Swedish firm.

To drive this message home and to invite customers to discover more about the brand, Klarna has teamed up with Spanish contemporary artist, who has worked with the likes of Gucci and Netflix, Ignasi Monreal.

Each of his seven digitally mythical designs represent a misconception of Klarna seen online or in the media.

Murals have been dotted across four UK cities: London, Manchester, Liverpool and Birmingham; where customers can visit to enter the virtual world of Klarna and bust the myths represented by the artwork.

Consumers have also been given an incentive to play the mythbuster challenges with the chance to win prizes if they finish the game, including a weekend stay at Claridges and £10,000 donation to Beauty Banks in the winner’s name.

“Transparency is everything to us at Klarna and for too long misconceptions have existed about our brand, so we decided the best way to address this was head-on and invite consumers to discover the truth,” said Klarna’s Head of Marketing, AJ Coyne.

“Given the ridiculous nature of the myths, we decided to create some epic mythical paintings and display them proudly across the UK.

“That said, a traditional media approach is not sufficient to change behaviour, so instead we’re inviting consumers to debunk in real time via our interactive experience and discover the truth for themselves.”

She added: “To help people see the truth, just telling them in a traditional comms campaign wasn’t going to cut it.

“We decided to invite them into the world of myths to seek the facts themselves. And of course, that meant we needed some fantastic paintings.”