Lycored inspires others to rethink beautiful at Sundance Film Festival

'Letters for Love' booth helps to raise awareness of ingestible skincare by promoting beauty from the inside, out

An innovative campaign by international wellness company Lycored is driving consumer engagement with ingestible skincare and helping to bring the category into the mainstream.

During the Sundance Film Festival in Park City, Utah last month, Lycored, sponsored a letter-writing station with the 'Playing for Change' Foundation in the Music Lodge.

The unique 'Letters for Love' initiative is an extension of Lycored's highly successful #rethinkbeautiful campaign designed to help set a foundation that beauty comes from within, and thereby promote the importance of ingestible skincare.

Starting with two stations at Sundance and a digital version, Letters for Love encourages people to write letters to themselves, with positive affirmations or love notes to promote self-love, thereby echoing the message of beauty from within and self-love that originated with the #rethinkbeautiful campaign.

The letters will be sent back to the writer when they least expect it, to reiterate the feelings they were thinking at the time.

Zev Ziegler, Vice President of Brand & Marketing at Lycored, said: "The full potential of the ingestible skincare category has so far not been fulfilled, largely because of the limitations of traditional thinking about beauty.  Our goal is to disrupt typical industry messaging by spreading the idea that beauty comes from within. In turn, that creates an emotional connection with the concept of ingestible skincare. Now we hope to inspire even more people to go beyond "skin deep" and take a moment to reflect on everything they love about themselves.” 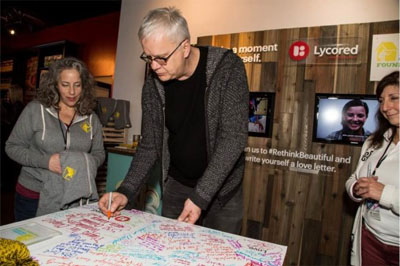 Tim Robbins was among the Hollywood stars who visited Lycored

The station at Sundance was visited by a string of Hollywood stars including Charlize Theron.

In addition to writing personal letters, they had the option to sign an enlarged replica of the postcard to share a few thoughts about what makes them feel beautiful.

Those who signed included Tim Robbins, Armie Hammer and Jack Black, who wrote: "Beauty is the realisation that life is an insane miracle." The initiative has featured prominently in consumer-facing media, including Inc. Magazine and Hollywood Life.

To continue this second phase of the campaign Lycored will now set up letter-writing stations in different cities across the US.

The first part of the campaign came in the form of an intimate, candid video, back in August, which was promoted via a social media influencer programme, further aiming to challenge the traditional notion of beauty and spreading the message that beauty is a feeling that comes from within.

To learn more about the #rethinkbeautiful campaign or to show yourself some love by writing a digital love letter, please visit http://www.lycored.com/rethink-beautiful/