Make Up in Paris 2012 attracts crowds with interactive ‘animations’

The first day of Make Up in Paris 2012, held at the Carrousel du Louvre, was hailed a success by show organisers as it attracted hundreds of visitors and a record number of exhibitors.

The trade show, held from 21-22 June and now in its third year, saw 83 exhibitors showcasing their latest innovations, compared with 60 in 2011 and 35 in 2010. While the fair was also held in the same location last year, two new rooms were booked to accommodate the 23 new exhibitors this year.

The show placed an emphasis on ‘animations’ or interactive events with make-up demonstrations taking place in booths and open spaces, live music performed on the cello and an extensive line-up of conferences. Designed to bring childhood memories back to life, an art competition also took place, which invited visitors to colour in a make-up design, to be judged by sponsor Natrafil. 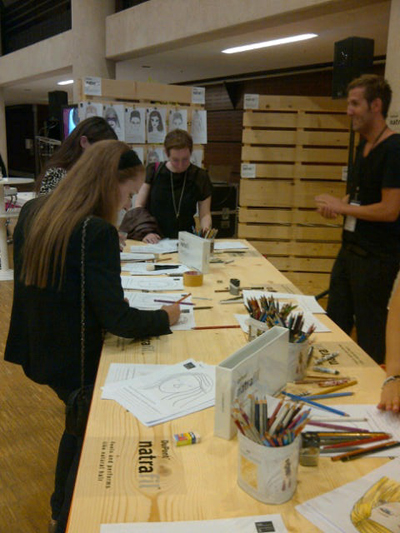 Sandra Maguarian, show manager, said at the event: “We wanted to give life to the event. We want people to be interested and attracted to it. We want people to come each year because they know each year will have something new. All the animations, demos and conferences you are seeing this year, will be for the last year – next year they will all be new and the show will take on a theme.

“One of the highlights is definitely the make-up animation demo, where make-up artists are performing. By doing this they can show how to use the products displayed in the booth and the benefits of using them. Plus we have a long list of conferences. We are trying to have conferences around different topics to do with make-up, not only innovation, but the cultural, artistic and technological side – we are trying to cover all subjects.”

The show went down well with exhibitors too, many of who were attending the event for the second or third time. Stefania Tornaghi, from Mascara Plus, said: “This is our second year at the event – it is a really nice show. The first time we came was three years ago but we were just passing by as visitors. Afterwards we thought we should definitely exhibit here.”

Lisa Topping, associate director at SLG Beauty, said: "It's SLG's first year exhibiting at Make Up in Paris so it was a brand new experience for us. As a manufacturer focused on developing innovative cosmetic applicators a show dedicated to make-up seemed a great format. The focus of Make Up in Paris and certainly the interest of the visitors is on product innovation. This is something we are passionate about at SLG so it was the perfect setting for us to showcase our new products. Not only this but also we had the opportunity to meet other suppliers and see what's new in make up – a great mix all round!"

While visitor numbers are yet to be confirmed, last year 1,900 attended the show, an increase of 500 on 2010. The first Make Up in New York event, held last September, attracted 25 exhibitors, with 24 of these resigning to exhibit at the next show and the venue space set to double in size. The first Make Up in SaoPaulo is also scheduled for 10-11 April 2013.

Talking about the success of Make Up in Paris, Maguarian added: “This is partly down to the fact that it is really focused on one single product, but it is also based in a very trendy and nice location in the heart of Paris – the heart of the cosmetics and make-up universe.”