Celebrating its fifth birthday in 2014, the growing MakeUp in Paris event is successfully retaining a boutique atmosphere despite servicing the sector\'s entire supply chain

The MakeUp in... format is expanding. Now in its fifth year, the original MakeUp in Paris event drew 2,804 visitors to the Carrousel du Louvre on 12-13 June 2014, a 12% increase on the 2013 edition. A total of 114 exhibitors participated, up from 90 last year. Meanwhile, MakeUp in NewYork continues to thrive; MakeUp in Seoul, which launched in March this year, is set to double in floorspace in 2015, according to organiser Beauteam; and the inaugural MakeUp in SãoPaulo will take place 3-4 December 2014.

However, Beauteam is keen to retain the MakeUp in... shows’ founding ethos as the brand continues to grow. “The success of this show is because the atmosphere is user-friendly and intimate,” said Sandra Maguarian, co-founder of Beauteam. “It’s not a big ‘launch’ show where everyone is lost. And this is an atmosphere we intend to keep forever.”

The novel MakeUp in... format has undoubtedly contributed to the shows’ success. The events focus solely on one part of the beauty and personal care industry – in this case colour cosmetics – but cover this in detail: from raw materials and packaging to contract manufacturing and beyond.

Moreover there is no bias towards any one aspect of the make-up manufacturing process. “If we have a new packaging exhibitor the next one has to be in formulations,” Maguarian explained.

As in previous years, MakeUp in Paris’ ‘animations’ proved a major attraction. These included MakeUPainting, which encouraged attendees to get their hands dirty playing with decorative elements like paints and sticky labels; MakeUPioneer, a show map highlighting those booths showcasing innovations; and MakeUPhantasy, a dedicated area for projects by ten design students from the Ecole Supérieure de Arts & Techniques de Paris (ESAT) around the theme of ‘gourmandise’ made using materials supplied by selected exhibitors.

Attendees felt the animations contributed to the event’s creative vibe. “I like it because there is always some point of creativity,” said Pilar González Gómez, VP Marketing at mascara brush and cosmetic applicator specialist Geka. “There is always something to see or to touch. You need to entertain your visitors.” 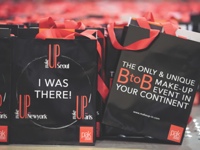 BASF, meanwhile, married the candy theme to one of its key trends for 2016

One animation particularly emphasised at this year’s event was the ingredients animation, MakeUPigments, which was first introduced in 2013 and which in 2014 saw participants create candy-themed displays. “Candies are the closest products to make-up because of the colours and the shapes,” said Maguarian. “I thought it was something that could be easily translated.”

Four companies were involved this year, with the original three, BASF, Safic-Alcan and Toyal Europe, being joined by Univar.

“We’re looking forward to creating a buzz with our candy-inspired selection of textures,” said Philippe Villequey, Industry Director, Univar Personal Care, EMEA. “Textures have always been a strong focus for Univar Personal Care. It is a very important area of formulation that has a big impact on consumer enjoyment and where constant innovation is essential.” Univar’s Coloured Trampoline, a BB jelly-cream (o/w emulsion), for example, has a bouncy marshmallow-like effect when handled.

BASF, meanwhile, married the candy theme to one of its key trends for 2016. As Valérie Pian-Parison, Marketing Manager, Personal Care Europe at BASF France, explained: “One of our themes for 2016 is ‘colourful’ which focuses on bright, shiny colours for the lips, nails and eyes... it includes fresh yellow and green hues, pink for the lips and ocean blue.”

Exhibiting for the first time at MakeUp in Paris, The Innovation Company showcased a palette of intense and primary colours for 2017 called Manhattan, inspired by classic movie-musical West Side Story, whose overture features an artist’s impression of Manhattan against a changing backdrop of colours.

“Our main reason to be here is to show these colour fashions... we’re not selling product [at MakeUp in Paris] but ideas,” The Innovation Company’s General Manager, Alain Saintrond, told SPC. “We named the colours after characters in West Side Story and Romeo & Juliet. If you come with a good story it goes into the subconscious and people remember.”

The 19 pigments in the Manhattan line all feature the company’s Colourplus Creastar technology, which means part of the powder ‘locks onto’ the skin providing a background against which the colours appear iridescent. “The final effect is remarkable,” added Saintrond.

Ingredients suppliers were not the only exhibitors exploring colour and texture trends at MakeUp in Paris. Cosmetic pencil private label manufacturer Schwan-Stabilo Cosmetics often showcases its capabilities at trade shows by focusing on key colour themes. For MakeUp in Paris, the primary theme was Amber. “We always pick one of our colour schemes for our booth design and this year the theme is Amber,” Claudia Schießl, from Schwan-Stabilo Cosmetics’ Creative Marketing team, told SPC.

“Amber is a very natural trend,” she added. “The use of wood and metal is very important, so we have wooden products with metal components and hot foil stamping. We also have very different textures within this trend, like liquids and creamy textures, and a little bit of a shine.”

All in the application

There were interesting concepts from both contract manufacturers and packaging suppliers at the Louvre-based show. Private label cosmetic pen manufacturer United Brands Marketing, for example, introduced a 2in1 Cuticle Softener and Trimmer. The user can apply the cuticle oil via the soft, white part of the high-tech tip, which also has a harder, coloured side that allows the user to push back the cuticle.

As Vanya Atanasova, the company’s Junior Project Coordinator, explains: “With most pens you use the cap, which is slanted, in order to push back the cuticle and this is unhygienic, because you put the pen everywhere.” 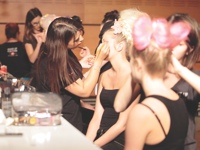 Two booths along, Geka demonstrated its know-how via a ‘Kingdom of Technology’ collection of twisted mascara brushes. The collection comprises lashCOUNTESS, made using irregularly surfaced EOS fibres which hold more product for a volumising effect; charmingPRINCESS, which upgrades the lashCOUNTESS with SEPA grinding technology, whereby the bristles are tapered for a separated effect; lashDUCHESS, which adds horizontal brush grooves to absorb a greater volume of mascara, known as the HYPNO brush cut; gracefulQUEEN, a combination of all the above technologies and Geka’s SIAM cut, which adds vertical volume zones for greater absorption and more targeted application; and empressEYES, which uses EOS fibres, SEPA grinding and HYPNO cut in addition to hybriTION technology, whereby an innovative foil is wrapped around the inner wire to create a reservoir.

The MakeUParade involves live demonstrations of the talents of students from local make-up schools. The 2014 show featured work from the Make Up For Ever Academy, the Institut Technique du Maquillage, the Flavia Palmeira school and the SLA Academy, and the theme was 'gourmandise'.


There was an interesting concept for eyeliner among the solutions on display at Topline Products’ booth, as the company’s Sophie Gaspin, Europe Sales Manager, Marketing & Communication, explained. “With eyeliners you normally have the kind you dip into a bottle or the kind with cartridges which maintain the formula inside, but which are expensive and which can dry up very quickly. This is a hybrid between the two solutions, whereby you fill the fluid formula directly into the pen,” she said. “It’s very easy to fill and the restitution is good.”

OekaBeauty, on the other hand, turned its attention to lip applicators. Like MakeUp in Paris, the plastic and metal components supplier was celebrating a landmark birthday, in OekaBeauty’s case, its 100th anniversary. “There are lots of [OekaBeauty] products from the last 100 years [on display] and we have new lip gloss applicators, which we are launching specially,” Jasmin Hamida, the company’s Marketing and Innovation Manager, told SPC.

Another innovation is OekaBeauty’s Antibacterial Flock Fibres for applicators, made from zinc oxide-modified flock. “The zinc oxide is in the fibre itself, so you do not lose the effect over time,” added Hamida. Advantages include skin care and healing properties.

Innovation in make-up formulas has presented interesting opportunities for packaging suppliers. For example, Virospack supplied the dropper system for Giorgio Armani Beauty’s game-changing (but very liquid) Maestro Fusion Make-up foundation and has, since then, experienced increased demand from this sector.

“We have our own tubular glass bottles, which, importantly, we’ve got a specific wiper for,” said Joanna Milne, Account Manager at Virospack. “With foundation the bottle neck can get very dirty – this keeps it much cleaner.”

Taiwanese packaging supplier Libo Cosmetics boasts more than 50 patents and used MakeUp in Paris to introduce several concepts including its UV Light Mirror Compact to the European market. Talking to SPC, Libo Sales Representative Mallory Wood said: “The technology is in the resin and the resin contains a UV indicator. When you go outside, it turns different shades of purple – lighter to dark – and when it’s dark that means the UV rays are very strong that day.”

Regarding possible applications, she noted: “A lot of powders now contain SPF, so this would be a great pack for a product like that. We believe that this is a novelty and we’ve gotten a great response, especially from brands targeted at younger girls.”

Trends forecasting agency Future-Touch, meanwhile, explored the possibilities opened up by 3D printing. “We created a 3D print collection of beauty packaging, then, for fun, we made rings, tie clips and cufflinks using a 3D printer to create the moulds,” said founder Antoinette van den Berg. “These will soon be available to buy as Touché Today, which is a play on our name: Future-Touch.”

Commenting on whether 3D printing is a viable solution for cosmetic packaging, van den Berg mused: “Compared to conventional production techniques it’s still expensive. But... it adds new possibilities to the design process.”

But what will the future hold for MakeUp in Paris, which returns to the Carrousel du Louvre on 18-19 June 2015? While it will undoubtedly be bigger, “growing is not our main target”, stressed Beauteam’s Maguarian. “Our main target is to have the key players and exhibitors who are bringing the key visitors. It is continually building on quality.”