Will Cook is the winner of this year’s SPC essay prize for the best essay on the SCS Cosmetic Science diploma course in 2010. This is his essay on The immune system: forms of human immunity and an absent or misdirected immune response

Will Cook is the winner of this year’s SPC essay prize for the best essay on the SCS Cosmetic Science diploma course in 2010. This is his essay on The immune system: forms of human immunity and an absent or misdirected immune response

Bacteria, viruses and fungi are among the most successful species on the planet and the environment we live in is plagued with many forms of microorganism. Some of these are of little consequence to humans while others are essential for many vital life processes. A third group, however, are defined as pathogens and can cause a wide range of human illness and disease.

In normal conditions, the internal environment of the human body is maintained at a consistent temperature of 37°C with high humidity. These conditions are ideal for the growth of a vast majority of pathogens. To avoid disease caused by potentially harmful microorganisms, the body has a wide range of defence mechanisms known collectively as the immune system.

The immune system is made up of several interlinking cellular and chemical systems which, under normal conditions, are ideally suited to preventing infection by foreign bodies. However, under certain circumstances, one or more of these systems can fail, with potentially serious consequences. In other instances an immune response can be misdirected. This can result in auto-immune disease or allergic reactions.

The human immune system has evolved to become a multilayered system including non-specific and specific components. Both forms of immunity can be further subdivided into a complicated network of systems working synergistically to protect the body from pathogens.

Innate immunity covers all forms of immunity that do not target pathogens specifically. They prevent invasion of the tissues and cells of the body by any form of foreign contamination by targeting general features of large groups of foreign particles.

At the most basic level, the body has several physical and chemical methods of protection. One of the most important is the skin. The skin forms a physical barrier between the interior and exterior of the body as the cells of the epidermis are packed closely together and the outer layers are strengthened by the protein keratin. In addition, the chemistry of the skin is unfavourable to microbial growth. The lower dermis is interspersed with sebaceous glands that produce sebum to help maintain a hydrophobic environment and repel bacteria within the hair follicles.

Other chemical methods are employed by the body within several water-based secretions. Sweat, tears and mucous membrane secretions generally have a slightly acidic pH and contain enzymes called lysozymes, which catalyse the deterioration of a bacterial cell wall, reducing the likelihood of infection. Internally, the body protects itself from infection via ingestion with a high concentration of hydrochloric acid in the stomach combined with pepsin (an enzyme to hydrolyse proteins) to maintain conditions that are highly inhibitory to microbial survival.

Finally the airways are protected by a combination of mucous, which traps invading pathogens and contains lysozymes, and cilia, which line the trachea and beat to transport mucous and trapped microorganisms out of the lungs to the back of the throat to be swallowed.

The body also has non-specific cellular means of protection from pathogens. These cells react instantly to any cell or particle recognised as foreign. One major class of white blood cell (leukocyte) involved in the innate cellular immune response are phagocytes. This group includes macrophages, neutrophils and dendritic cells, responsible for recognising, engulfing and digesting invading foreign bodies and associated toxins. This process is called phagocytosis (figure 1 and table 1).

Not all cells involved in the non-specific immune response are phagocytes. Other cells carry out various vital functions, outlined in table 2. 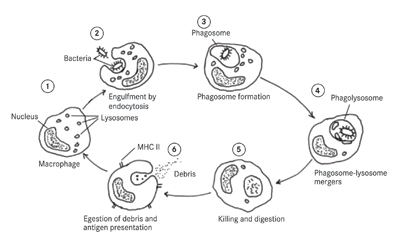 1. The phagocyte has cell surface receptors for recognising pathogens
2. Once identified, the invading particle is endocytosed into the interior of the phagocyte
3. A phagosome is formed around the pathogen isolating it on the interior of the cell
4. The lysosomes merge with the phagosome
5. Enzymes from the lysosome kill and digest the pathogen into water soluble debris
6. Debris is exocytosed from the phagocyte and antigens are presented on the cell surface to activate other cells involved in the immune response

Lymphocytes are white blood cells with glycoproteins on their cell surface that specifically recognise foreign antigens. These cells are subdivided into two types

B-lymphocytes and T-lymphocytes, named for the fact that they mature in the bone marrow and thymus respectively.

B-lymphocytes (B-cells) are involved in the humoral immune response. This subdivision of adaptive immunity relies on the production of soluble proteins called antibodies. When the surface glycoprotein of a B-cell binds to its complementary antigen, the cell becomes activated and responds by releasing the specific antibody for the antigen into the bloodstream. The activated B-cell then divides by mitosis to produce clones known as plasma cells. These clones propagate the specific antibody release to rapidly increase the concentration of the antibody. Some of these clones have increased longevity and become memory cells. These remain in the blood to increase the speed and intensity of the response should the antigen be encountered again.

T-lymphocytes (T-cells) are the other class of lymphocyte. Unlike B-cells they are involved in the cellular sector of the active immune response (not the humoral) and don’t release antibodies. There are four categories of T-cell, each with a specific role.

Primary immunodeficiency can affect any part of the immune response but most commonly involves either the B or T-lymphocytes.

Many B-cell deficiencies are grouped together under the collective term common variable immunodeficiency (CVID), the most common form of primary immunodeficiency. Some of the genetic causes of CVID are understood but others are still unknown. The net result however is the insufficient production of effective antibodies in response to pathogenic infection.

In rare cases, the B-cell humoral deficiency is combined with a deficient cellular (T-cell) response. These cases are termed severe variable immunodeficiency (SVID).

Where CVID reduces the number of antibodies released by the B-cells, other syndromes such as thymoma and hypogammaglobulinemia result in a reduction in the number of B-cells. This is caused by reduced production or inhibition of maturation, reducing the efficacy of the adaptive immune response.

Thymic aplasia is an example of a genetic disorder impacting on the cellular immune response only. Several genetic disorders can cause this syndrome but they all result in genetic defects of the thymus, leading to abnormalities of the T-cell development and causing significant immunodeficiency. 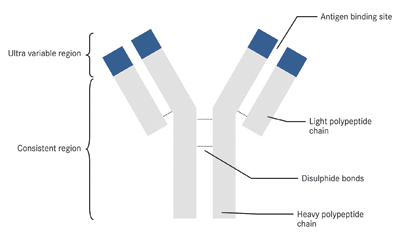 The variable region is responsible for antigen binding and is specific to recognise one antigen. As an antibody has two of these sites, two antigen sites can be bound by each antibody. The hinge protein offers flexibility to the molecule, allowing pathogens to be clumped together. The constant region is recognisable by innate immune response and marks the pathogen or groups of pathogens for phagocytosis

Secondary immunodeficiency is acquired later in life due to environmental factors. Causes include infectious disease, trauma or malnutrition. One of the most studied causes of infectious disease related natural immuno-deficiency is acquired immunodeficiency syndrome (AIDS). This disease is caused by the human immunodeficiency virus (HIV) and is transmitted between individuals by bodily fluid exchange. Once a patient is infected with HIV, the virus migrates through the blood and specifically targets the T-helper cells, macrophages and dendritic cells. The infected cells are then recognised and destroyed through the processes of the normal immune response, reducing the count of these cells in the blood. Once the numbers of these cells have fallen below a certain level, the infected individual will begin to show the signs and symptoms of AIDS.

However, in certain circumstances the system of self-recognition fails and a cell or tissue of the body is mistakenly identified as foreign, triggering an immune response. An example of a disease caused by a misplaced immune response is rheumatoid arthritis, which results in swelling, pain and immobility in the joints affected.

Rheumatoid arthritis is also an example of where immunodeficiency may be artificially induced using drugs as a treatment. This is called immunosuppression. Many immunosuppressant drugs mimic the body’s natural mechanisms of immunosuppression and are used in cases where an immune response does more harm than good. It is used as a treatment for autoimmune disease and also in organ transplant, where the new organ is recognised as foreign.

An allergy is an exaggerated response to an antigen. In most people, allergies are not serious medical conditions. However, a severe allergic reaction can be life threatening.

There are four groups of hypersensitivity reactions involving undesirable immune system activity. Of these groups, the term allergy describes only Type 1 reactions.

Type 1 hypersensitivity reactions occur shortly after contact with the allergen and are very common. An antigen capable of creating an allergic reaction is called an allergen. However a reaction will not occur when the immune system comes into contact with an allergen for the first time. In the process of sensitisation, the adaptive immune response recognises and creates antibodies against an antigen, which it then maintains as a memory that is activated in the case of a second exposure. As a result, on future contact, IgE type antibodies for the specific allergen already exist and create a strong secondary immune response. These antibodies interact with the allergen forming an antibody-antigen complex. This complex then binds with a mast cell or basophil, causing activation and resulting in the release of chemical signalling molecules such as histamine and serotonin, responsible for the symptoms of an allergic reaction.

Symptoms of an allergic reaction can either be local (such as hives) or systemic (more major, including difficulty breathing). Allergic reactions often have two phases. An initial phase, lasting up to one hour, may include symptoms like bronchoconstriction and mucous secretion. Late phase reactions can be more intense and can last for over eight hours after allergen exposure. Symptoms are caused by the migration of leukocytes to the original site of reaction and are similar to those in the initial phase, but can include further exacerbation of symptoms and increased inflammation.

Anaphylaxis is the most serious type of reaction and can lead to anaphylactic shock. Anaphylaxis occurs upon the second contact with an allergen that the immune system has already been sensitised to. The severe nature of the reaction is down to the reduced cardiac output caused by a combination of vasodilation and bronchoconstriction, leading to shock. Left untreated, anaphylactic shock can cause death in minutes.

UK’s Society of Cosmetic Scientists reveals new council members for 2022
Anti-pollution skin care: Everything you've ever wanted to know
Current concepts in claim testing
Society of Cosmetic Scientists creates lockdown DIY beauty video with Sam Farmer
How to communicate beauty claims to the public
Protecting your brand – the expert view
The role of quality in cosmetics
SCS Lecture: Ageing and Anti-Oxidants - in search of a new paradigm
Prevention and solution