By Kathleen Armstrong 10-May-2017
Fragrance 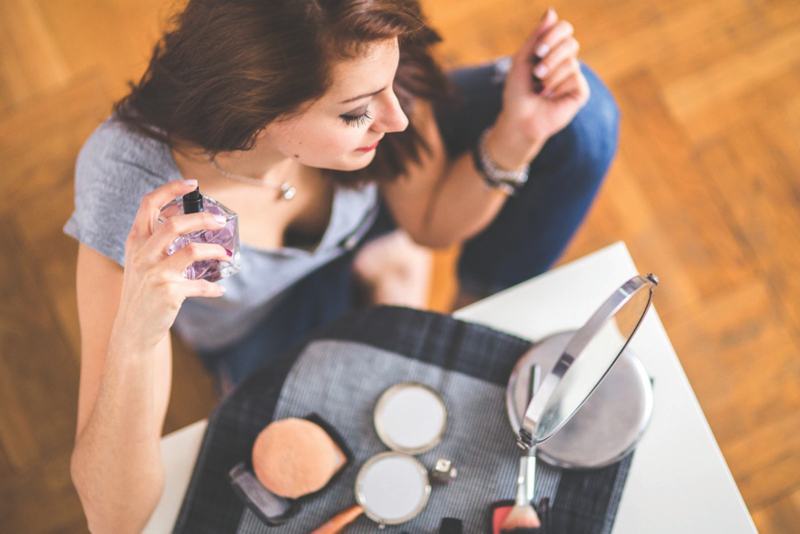 The Brazilian fragrance market edged up 1.5% in 2016 to total US$5.75bn, down on 2015’s growth of 6% but enough to maintain its position as one of the largest fragrance markets in the world – and the largest when measured by volume of fragrance consumed per capita, thanks to its consumption of mass fragrances, according to Mintel data.

“Price plays a key role in the dominance of the mass segment in fragrances. It is the number one factor for consumers when buying a fragrance, followed by the scent and the brand name,” says Euromonitor.

Companies like Natura Cosméticos and O Boticário have maintained their popularity by improving the quality of their scents and keeping them at reasonable prices.

O Boticário’s newest fragrance, launched in March 2017, for example, is Glamour Love Me, an on-trend ‘nude’ fragrance that aims to deliver a delicate touch of sensuality with a mix of rose petals and vanilla with notes of bergamot, apple, iris, rose, muguet, amber and musk.

There is also a moisturising lotion. Natura Cosméticos, meanwhile, revamped its Natura Ekos line in September, improving the range of Amazonian actives included in the products.

In February 2017 it launched a new Natura Ekos fragrance, Flor da Manhã, a scent that aims to evoke the bouquet of flowers that blossom at dawn.

The perfume blends citrus notes with tones of floral and wood, along with a blend of essential oils from the Amazon: pripioca, pataqueira and copaiba. 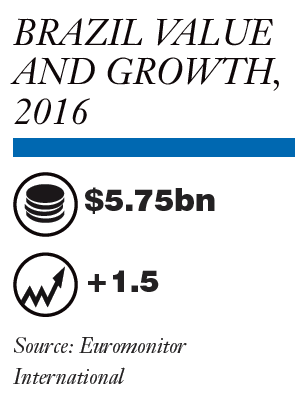 Nevertheless, Euromonitor research reveals that Natura and Avon Cosméticos, the country’s two largest direct selling companies, lost market share in 2015 to small- and medium-sized companies – such as direct sales players Jequiti Cosméticos and Mary Kay, and other smaller companies such as Hinode and Polishop.

“With great expertise in the perfumery sector... with each creation, we develop perfumes that combine personality and trends,” said Hinode Group Marketing Director Alessandro Rodrigues in a press release for the launch of the company’s latest fragrance line, Feelin’, in April 2017.

Created by perfumist Carmita Magalhães, Feelin’ Para Ela (For Her) is based on mandarin and red fruits with floral accords and a woody amber background. Feelin’ Para Ele (For Him) was created by Eve Miralles and blends notes of violet and fig leaves with grapefruit, Calabrian bergamot and white pepper, patchouli and leather with a touch of saffron, musk, tonka bean and incense.

Mary Kay, on the other hand, is appealing to teenage girls with floral gourmand fragrance Hello Brilliant Deo Colônia, launched in January this year in Brazil and Mexico only.

The bottle sports a colourful lid resembling a flower, while the box that the fragrance comes in can be personalised with up to three photos.

The brand describes the cologne as “a high-spirited fragrance to match with girls who love to share their funniest moments with their friends”.

The company regularly releases celebrity fragrances, and one of the latest is Colônia Desodorante Feminina Luciana Gimenez, a vibrant oriental fragrance for the Brazilian TV presenter, actor and model.

Promotion includes a TV ad, as well as a YouTube video where Giminez demonstrates how to apply it. 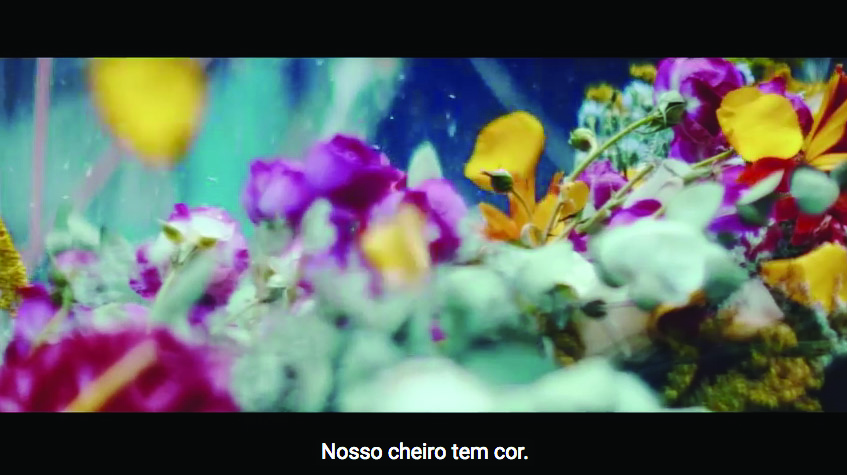 Natura’s new campaign, Natura. A Casa da Perfumaria do Brasil: The Perfumery House of Brazil, launched on 7 March 2017, aims to not only illustrate Natura’s position as the only national brand with its own in-house perfumer (Veronica Kato) but also to position its fragrances as representing the people who are creating the new Brazil.

The campaign features poet Mel Duarte whose poems challenge marginalisation and oppression; rapper Emicida; and plastic artist Rita Weiner. “They are people who are building and transforming reality.

It is a generation that is bringing change responsibility to itself, and has done incredible, creative, innovative things in many different areas.

And it is this Brazil that we are representing in the campaign,” says Natura’s Vice President of Marketing, Andrea Álvares.

The soundtrack for the film, Xique-Xique, was written especially for Natura by Tom Zé and Miguel Winisk. The campaign will feature on television, on the internet and in the Natura Edition catalogue.

Although premium fragrances still account for a small proportion of the market in Brazil, their share compared to the overall market value is rising. 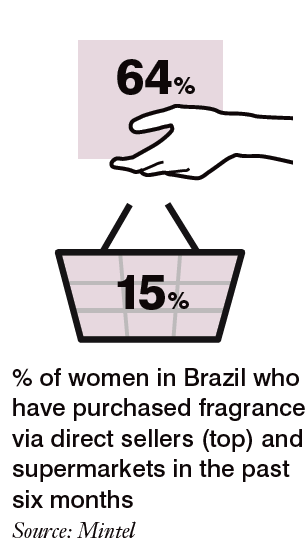 “The main driver behind this growth was the availability of such brands in more channels, besides the valuation of the US dollar against the Brazilian real, which forced manufacturers to raise prices and players passed on these price increases to consumers,” Euromonitor explains.

“Besides, sales of premium fragrances performed well in Brazil due to the expansion of beauty specialist retailers such as Sephora, The Beauty Box and Calèche.”

E-commerce also played a role in the rise of premium fragrance sales, with increased use of sites such as Sephora and Belezanaweb.com.br.

Naira Sato, Research Analyst at Mintel, is positive about the prospects for the Brazilian fragrance market, which has remained resilient even through the country’s economic crisis.

“Despite the retraction seen in the beauty market, companies keep investing in new technologies and looking for new ingredients, more premium and/or natural, making the Brazilian market more dynamic,” she says.

“Male consumers are also buying more beauty products and brands have been investing in new fragrances for men.”

A survey of internet users aged 16-34 conducted by Mintel indicated that men in that age group tend to buy more fragrances in supermarkets than women, possibly because the convenience and practicality of supermarket shopping appeals to male consumers.

Therefore, Sato suggests, promoting fragrance through the distribution of free samples and having testers available to try could offer an opportunity for brands to increase supermarket sales, which continue to lag behind direct sellers and branded physical stores as the channel of choice for both male and female fragrance users aged 16-34.

The second most popular channel for a fragrance purchase for both men and women was branded physical stores such as O Boticário or The Body Shop.

O Boticário launched Malbec Sport in September, a fragrance designed to appeal to men who like the rush of adrenaline and a feeling of freedom.

Its 8 Elements Accord aims to evoke sensations such as the scent of leather, wind on the face, high speed and the smell of the tires on asphalt.

To lure car-loving men into buying the fragrance, consumers who bought the scent from 5-25 September were entered into a raffle for a BMW 428i Cabrio Sport GP.

In October O Boticário used the smell of coffee to draw not just men but also women, as it launched Coffee Paradiso Desodorante Colônia (Deodorant Cologne).

Coffee Paradiso Men brings the aroma of coffee together with Belgian chocolate and wood, enhanced by warm amber and cardamom. The feminine version blends coffee with creamy wood and touches of strawberry, raspberry and nutmeg. 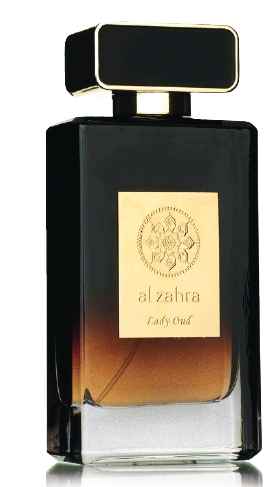 Lady Oud is an oriental woody fragrance; Musk Passione focuses on sensuality and determination with a citrus top, a floral heart of rose and jasmine and a base of musk, amber and intense vanilla. For men, to highlight their strength and masculinity, Incense Oud features cedarwood, sandalwood and pure essence of oud. Safari Oud is a blend of musks, fruits and woods and is designed to bring out men’s sensitivity.

In the Al Zahra boutique in São Paulo, the fragrances are marketed as jewels: the customer is invited to sit for an olfactory tasting of the Arabian scents, and dates and coffee are offered.

To draw customers in, there are also events such as coffee readings, henna tattoos and Tarot consultations.

“This year, Julia is expanding her brand and creating aromas for home,” the brand tells Cosmetics Business.

The vast majority of perfumes purchased by consumers aged 16+ and surveyed by Mintel were national brand perfumes (82%), such as O Boticário or Eudora, or perfumes sold through direct sales (81%), such as Natura or Avon.

Imported brands such as Chanel or Lancôme (L’Oréal) were used by 70% of those surveyed. One brand that has worked to plant its feet in both the international and national camps is L’Occitane with its L’Occitane au Brésil range of products that exploit Brazil’s vast biodiversity.

The brand’s newest fragrance, launched in April 2017, is Ninfa das Águas, inspired by the legend of the Vitoria-regia water lily (Victoria amazonica) which floats on the Amazonian waters during the day and at night turns into a beautiful woman.

Lilies also featured in O Boticário’s new perfume launched in November. The My Lily eau de parfum adds narcissus flower to the bouquet of lilies for a touch of freshness.

“The narcissus flower cannot be planted; it is a wildflower, unique and authentic,” says Perfume Manager Jean Bueno.

“My Lily was designed for women who want to live life without rehearsal. It is a modern fragrance, very innovative for the Brazilian market, with floral facets, fresh green notes and the sophistication of lily.”

Despite the retraction seen in the beauty market, companies keep investing in new technologies and looking for new ingredients, making the Brazilian market more dynamic

According to Mintel’s research, consumers aged over 45 show a preference for natural ingredients, although they are also less likely to wear fragrance than their younger counterparts.

Therefore, Sato suggests investing in fragrances made with naturals could draw more of the over-45 market.

The main Brazilian brand that keeps natural ingredients in the public eye is Natura Cosméticos and in November it launched Ilía, a fragrance that aims to capture both the strength and delicacy of a woman.

It brings notes of pink pomelo and red fruits together with floral notes of freesia, muguet, jasmine and gardenia and a complex of vanilla and tonka bean with hints of amber and musk.

In February Natura expanded its Kaiak line with Kaiak Aventura, a fragrance that is inspired by the ‘vibrant energy of nature’.

“We created a perfume to accompany the modern and dynamic woman,” says Veronica Kato, the brand’s in-house perfumer, who created the scent with Givaudan nose John Gamba.

L’Occitane au Brésil is also working to integrate the benefits of natural ingredients in its fragrances. In September 2016, it described Abraço Deo Cologne as translating “the softness of a hug into an inspiring and cosy fragrance”.

The brand also released Deo Colônia Balanço do Rio, a deodorant cologne designed to evoke the sensation of floating on the rhythms of a river with a citrus fragrance to evoke a shower of raindrops.

Meanwhile, in March 2017 L’Occitane au Brésil expanded its Capim-Limão line with Capim-Limão Tangerina which harnesses the freshness of lemongrass and the energy of tangerine.

Perhaps because around a quarter of Brazilians tend to wear the same fragrance all the time, Mintel’s survey revealed an interest in fragrance refills, although the fact that they are usually cheaper may also have played a part, Sato says.

She suggests that refills should not be limited to mass brands but could also be used by more premium fragrances to attract new customers.

One perfume brand that follows this principle is niche label Amberfig, which launched its first fragrance in 2014.

Finally, another area in which Sato sees future opportunities is in fragrant body sprays and body mists.

“In spite of its lighter and fresher concentration, scented body sprays/mists are used daily by only 26% of respondents.

"They seem to use scented lotions more frequently: 52% reported using this type of product every day,” Sato says. “There is an opportunity for brands to offer more scented body sprays/mists that deliver freshness.”

With fragrance use so embedded in Brazilian culture, such opportunities can help brands to explore the potential of the segment even further.

Current fragrance trends in Brazil lean towards fresh, citrus and fruity notes for refreshment, particularly in the summer months