Brightenyl is the very first cosmetic active ingredient that is activated by a new functional layer of the human skin: the stratum microbium. This new layer acts as an active living veil converting Brightenyl in two molecules, which act on seven biological targets to obtain a perfect skin complexion.

All skin types may experience colour and pigmentation disorders. These include discolouration marks, brown spots, redness as well as pigmented patches on skin. Uneven skin colour and tone give an unhealthy, dull and tired appearance. The ideal look for healthy skin of any colour is a clear even skin tone. Controlling the skin colour, redness and reducing pigmentation require the use of different ingredients as these parameters rely on several different biological processes (vasodilation, inflammation, melanogenesis, coagulation of melanin, accumulation of UV-induced damage).

Our body lives in symbiosis with massive amounts of beneficial microorganisms, which enable us to maintain our health on a daily basis. This micro-flora is called the human microbiote. It accounts for almost ten times as many cells as in the rest of our body, while representing orders of magnitude more genes than are contained in the human genome.

The human skin being the largest exposed organ, is also one of the largest microbial habitats. The human skin microbiote has a known symbiotic population from 100 to more than 10,000,000 cells per cm2 depending on the body area1. The mutualistic interaction between humans and skin microflora is a result of long co-evolutionary processes involving the skin as the physical interface of our body with its outside environment. The traditional microbiology-based methods do not offer a full access and understanding to our skin microbiote. 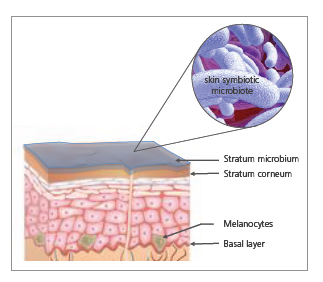 It is estimated that 50 to 90% of existing skin microorganisms cannot be cultivated in a laboratory 2. A recent high throughput DNA analysis technology (called metagenomics) has enabled us to gain a more exhaustive vision of the skin microbiote, and we are just beginning to understand the microorganisms’ complex relationships with each other and our bodies in addition to the cosmetic products we apply to our skin. The skin microbiote (stratum microbium) is physically located on the top of our skin, in combination with the stratum corneum.

Induchem's R&D center, libragen, is one of the world’s leading centres in the metagenomic technology. They have recently analysed the human skin microbiote by sampling the superficial layers of the skin of volunteers, and sequencing the genomes of their stratum microbium. The analysis of 40 billions of DNA bases has enabled to discover that our skin microbiote possesses genes of alpha-glucosidases, highly selective enzymes which could be used to activate cosmetic ingredients and increase their efficacy on the skin.

Raman spectroscopy and in vitro tests on human skin microbiote have shown that once applied on skin, THBG is partially converted into THBA by the enzymatic activity of the microbium stratum layer. This process mimics the concept of pharmaceutical pro-drug, which is activated in the human body to become fully functional.

Delivered in situ, THBA and THBG act in synergy on 7 biological targets to regulate and optimise the skin complexion: 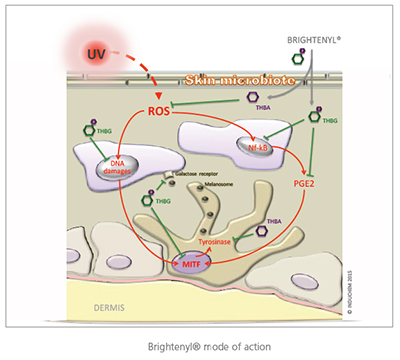 The biological activity of Brightenyl has been evaluated on a panel of Korean women versus a placebo for a period of 84 days using 3 independent methodologies:

The volunteers have experienced a clear and visible evolution of the quality of their complexion with:

Skin tone uniformity and skin colour optimisation (including reduction of pigmented spots) is among the highest consumers' demands worldwide. Up to now, the only solutions to optimise skin complexion required several ingredients to deliver clinical benefits. Brightenyl is a S.M.A.R.T. (Skin-Melanin-Active-Removal-Technology) ingredient. Far from probiotics, prebiotics and other traditional skin microflora ingredients, it represents a new generation of multifunctional skin complexion optimising molecule, which is activated in situ by the living veil called the stratum microbium.

Brightenyl has been created according to the pharmaceutical development processes: an active core (THBA) has been optimised by biotechnology process to generate a stabilised and bioactivable compound through rational design. This compound has been synthetised with cutting edge manufacturing processes, and further evaluated through complete in vitro and ex vivo tests to understand its multiple modes of action. It has then been tested on human skin in double blind versus placebo conditions under the control of a dermatologist.

Last but not least: S.M.A.R.T. and GREEN

The synthesis of THBG relies on a pure enzymatic process that complies with the 12 rules of green chemistry. This process has been optimised to utilise water only as a solvent and limit the over-usage of energy to manufacture a pure stereospecific molecule in one step. The wastes of the synthesis are mainly composed of water and a small fraction of unreacted THBA. THBG is purified on a column to deliver a >95% pure molecule at the end of the manufacturing process.