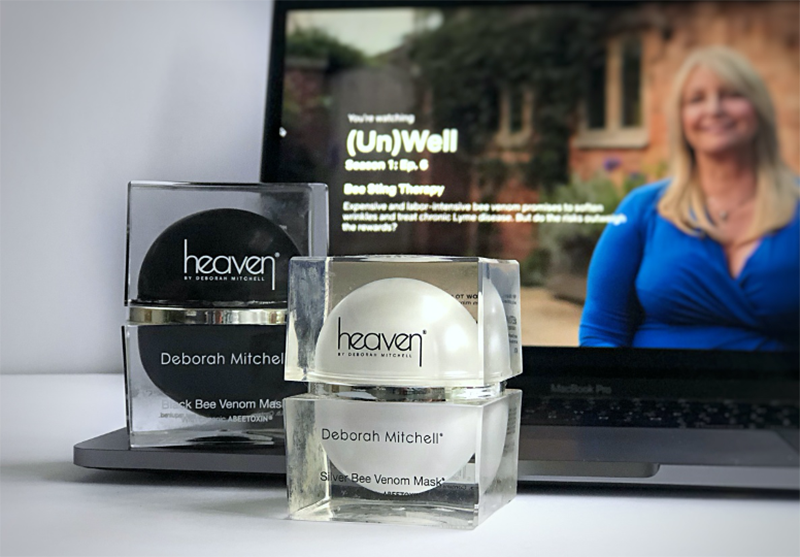 Staff at Heaven Skincare have been working around the clock to keep up with orders following founder Deborah Mitchell’s appearance on Netflix.

Demand for the beauty brand’s famous Bee Venom Masks rocketed after the products were featured on the new documentary (Un)Well.

Deborah appears in episode six of the streaming service’s latest must-watch series where she discusses her patented ABEETOXIN formula and anti-ageing creams. The programme shows her being interviewed in her Shropshire home, mixing up products in her kitchen and treating one of clients at her flagship Shifnal salon.

Following the launch of (Un)Well, Deborah says online orders “went crazy” with buyers from all over the world wanting to get their hands on a Bee Venom Mask, available in Silver, Black and Gold.

“As soon as the episode aired our website just went crazy and we had enquiries coming in from everywhere,” says Deborah. “We’ve been so busy keeping up and delighted to see such an incredible spike in sales.” 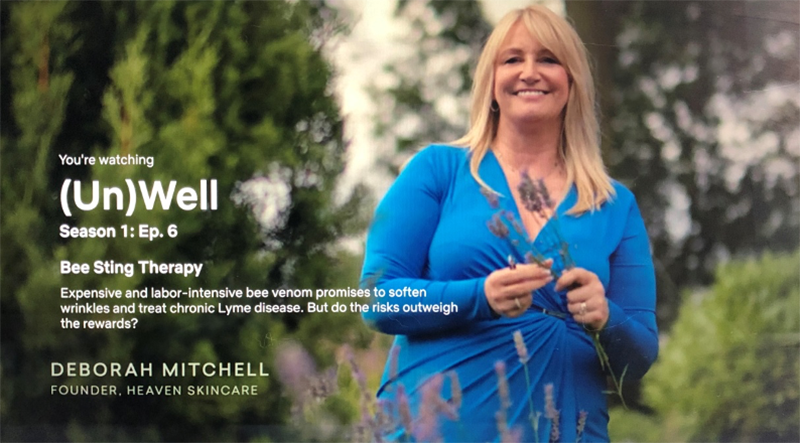 The Netflix docu-series takes an in-depth look into the lucrative wellness industry, with episode six focussing on Bee Sting Therapy and how Deborah – who invented ABEETOXIN more than 16 years ago – has trail-blazed its use in the anti-ageing skincare market.

“I absolutely loved filming the episode; it really gives me the chance to explain why my bee venom helps combat signs of ageing, how great it is for all skin types and what goes into creating each pot.”

Dubbed the “facelift in a jar”, her Bee Venom Masks are a favourite of royals and celebrities thanks to fact they control the facial muscles to tighten, firm and lift while at the same time penetrating fine lines.

“I wanted to find an alternative to Botox after I noticed wrinkles starting to appear on my face,” she explains. “My sister was a beekeeper, so I had a lot of information about bees and honey in my head. The masks have gone on to be some of the most successful face creams; and yes, there have been many copies in different formats, but I hold the key!”

Give the gift of heaven this Christmas
The Autumn Essentials
Heaven's skincare horror stories
The must-have skin boost that you just spritz and glow
Passport, tickets... skincare!
For a heavenly Father's Day
How a dream about bees became a global skincare success
Changing your skincare with the changing seasons
Skincare to put a spring in your step
Perfect skin for Mother's Day
Made in Britain for more than 25 years
Heaven launches new skin saving beauty drops
Skin care trends for 2022
Give the gift of Heaven this Christmas
Marking World Vegan Day with a new era in plant-based